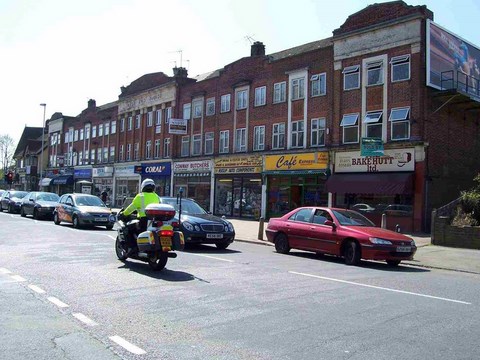 Ruislip Gardens has always been regarded as the poor relation as far as the six "Ruislip's" are concerned mainly because it consists of one large estate of houses that were not really as well built as those in Ruislip Manor and there were almost no detached houses there, unlike South Ruislip.

The estate is almost directly opposite the station and houses they are mainly in fairly long terraces. There is also a section of it given over to local authority housing, although many of these will now be privately owned. The station has what I suspect must be the smallest railway station car park in England (!?). Run by NCP is has a mere 14 spaces.

The shopping area to be found the other side of the railway bridge can very much be regarded as a secondary parade.

It is fairly hard to say where Ruislip Gardens starts and finishes once you go beyond the railway bridge from the station. There is a small estate of houses to the west just beyond of the shops which would be deemed to be in Ruislip Gardens and anything further north of there would be seen to be as either Ruislip or Ruislip Manor.